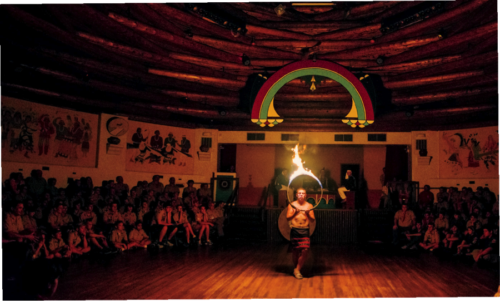 The audience in La Junta rings the circular floor of the kiva, waiting for the Koshare Indian Dancers to emerge.

ON THE WALLS of the huge, circular room on the Otero Junior College campus are American Indian paintings and pottery, all beneath a great dome constructed entirely of pine logs. The lights dim. Thirty performers – boys and girls wearing the traditional dress of the Sioux, Kiowa and other tribes – walk onto the kiva’s floor, their stage directly in front of spectators. On an elevated platform, percussionists beat a large drum made of stretched hide. A singer joins in, chanting a melody. The dancers begin to move, their every gesture in time with each other and the music. Beads, feathers and bells attached to the swaying fringe of their leather clothing add a rustling, jingling rhythm to the music filling the kiva. The Koshares originally learned their dances – the Shield, Little Antelope, Fancy Shawl and others – from tribal members and Native American groups.

THEY RECREATE THE TRADITIONS of American Indian tribes as closely as possible. The Koshare Indian Dancers, however, are not members of any tribe; they are members of Boy Scout Troop 232 and an affiliated co-ed venturing crew. Each Koshare researches, designs and crafts his or her own stage outfit – leather moccasins with decorative beadwork, shawls and headdresses. Dedicating untold hours to hand-making apparel demands self-discipline, and affording the supplies to create the regalia requires sacrifice. One Koshare recently surprised her mother by using savings intended for an iPhone to purchase supplies for moccasins. 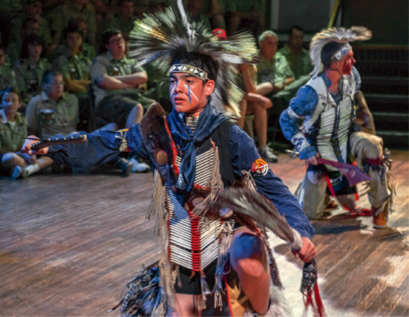 “La Junta is in a very poor area, and there are a lot of families that struggle,” said David Scott Balicki, a Koshare alumnus who now leads the group’s dance program. The Koshares give troubled youngsters confidence and a place to belong, Balicki said. He spoke last year to a Koshare who was having a difficult time, being bullied in school and plagued by familial drug abuse at home.

“The young man said that he loved the Koshares so much because it was the only place that he felt like a kid again, because of everything that was going on in his life.”  That stabilizing influence helps the Koshare boys and girls, and, indirectly, the community as a whole, where the group has become part of the local culture. Of the 565 students at La Junta Junior/Senior High School, 50 are Koshare Dancers. Ninety percent of Koshares go on to pursue secondary education, Balicki said, and more than 100 of the Koshare Boy Scout troop’s 600 Eagle Scouts have attained doctorate degrees. No matter what Koshares go on to achieve, their dancing days are always part of their lives, said Jeremy Manyik, another former Koshare who now is director of operations at the Koshare Indian Museum, which is attached to the kiva. “One of our past Koshares is a surgeon who travels to Third World countries. He’s found that the beadwork that he learned – which he still creates – has helped him with stitching during surgeries,” Manyik said. 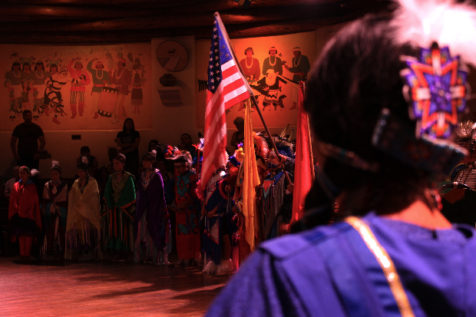 “We’re not an extremely wealthy or rich organization, but we try to give each kid every opportunity in life in general, not just in the program,” Balicki said. Koshare alumni help support basic needs like school supplies and clothes, as well as educational opportunities like the Koshares’ three-week annual trip, which is fully sponsored and cost-free to the children.

BECOMING A KOSHARE, pronounced ko-SHAR-ee, the Pueblo Indian word for “delight maker,” has been a goal of La Junta Boy Scouts for generations, ever since the group was dreamed up by legendary Scoutmaster J.F. “Buck” Burshears. As a Boy Scout in the 1920s, Burshears was fascinated by the rich American Indian history in La Junta. Before the small town emerged on the southeast Colorado plains, this area along the Arkansas River was home to Bent’s Old Fort, built along the Santa Fe Trail as an outpost where Plains Indians came to trade buffalo hides for manufactured goods. Burshears was inspired to incorporate Native American dances and traditions into his troop’s activities, founding the Koshares in 1933 with a mission to integrate Scout leadership with tribal history. 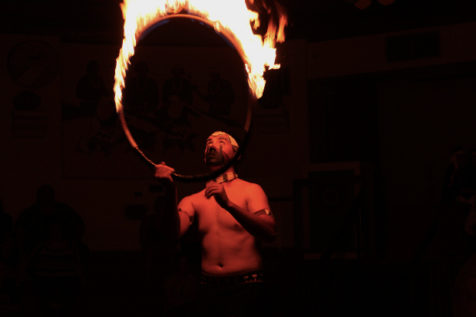 The group’s reverence for Indian customs and traditional knowledge earned the approval of a number of tribes. The Koshares’ first performance was in the basement of St. Andrew’s Episcopal Church in La Junta, but they soon were in demand at performances in Denver, and eventually across the country. During World War II, the troop donated proceeds from their performances to buy war bonds, and they teamed up with renowned boxer and Colorado native Jack Dempsey to collect scrap aluminum for the war effort.

In the summer of 1946, the Koshares were praised nationwide for what the Associated Press called the “million-dollar rain:” The boys traveled to water-starved Kansas to perform a traditional prayer for rain showers. Within two hours a downpour ended the dry spell, saving the wheat crop. The Koshares’ first clubhouse was a modified chicken coop, but Burshears and his Scouts were inspired to attempt something grander. One of the troop’s frequent trips took them to Ancestral Puebloa ruins in New Mexico, where in 1939 they saw the reconstructed Great Kiva, a large, round room that the ancient inhabitants used for ceremonies and dances. The Koshares decided to build their own kiva. 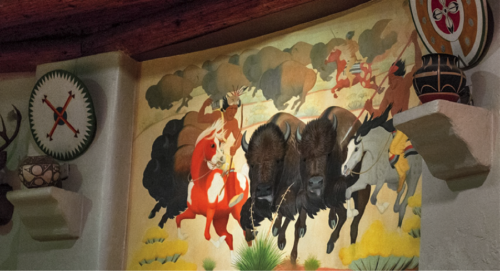 By the late 1940s, the Koshares had raised $10,000, and the city of La Junta agreed to match that amount. However, city council members were shocked when the money only went as far as affording the kiva’s foundation – when they looked at the blueprints, they hadn’t realized the structure’s immense size. “The city fathers were about ready to put me in a straitjacket,” Burshears said, as shared by Balicki in his book, Be a Great Boy. Some people in La Junta worried that the project was too big to complete. Then there was the matter of the proposed log roof, to be made of telephone poles salvaged from a nearby airfield demolished after World War II.

ARCHITECTS SAID SUCH A ROOF WOULD COLLAPSE without support columns, but Burshears enlisted an engineer friend to figure out how to make it work. The engineer found his solution by stacking toothpicks around the rim of a teacup, crisscrossing them into a circle. The idea translated into real life, and the Koshare Kiva’s roof, made from 620 overlapping telephone poles, became the largest selfsupporting log roof in the world. Adjacent to the Koshare Kiva, where the dancers have performed since its completion in 1949, is the Koshare Indian Museum and Trading Post. The museum has a multi-million dollar, 12,000-piece collection of Native American artwork and artifacts and is open to the public five days a week. Burshears led the Koshares for more than 50 years until his death in 1987, but subsequent generations have inherited his refusal to compromise on a dream, even if – like the construction of the kiva – it seems impossible. 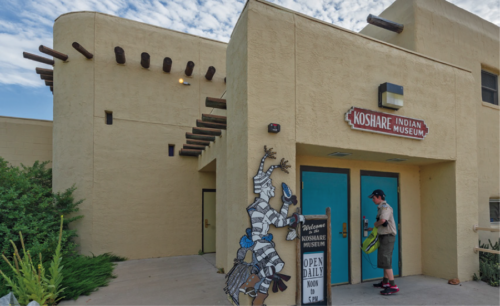 Jeremy Manyik was an Eagle Scout and Koshare head chief 20 years ago when the Koshares were invited to perform at the Kennedy Center’s 25th anniversary celebration in Washington, D.C. It was a great honor, but there was a problem: The Kennedy Center could only pay for five dancers to attend, but a proper performance required at least double that number.

Not knowing how else to acquire the funds, Manyik first persuaded an airline to give the boys discounted airfare at $100 per round-trip ticket. Still lacking even that amount of money, he hit on a desperation solution: the lottery. Non-winning Colorado State Lottery scratch tickets can be sent in for a second-chance drawing, so Manyik searched ashtrays and garbage cans all around La Junta for discarded scratch tickets, put the Koshares’ name on them and sent them in. By a stroke of luck, or perhaps fate, the lottery picked one of their tickets in a random drawing. “On Valentine’s Day, the Colorado lottery gave us the check, for the exact amount that we needed, in a clear heart-shaped balloon,” Manyik said. 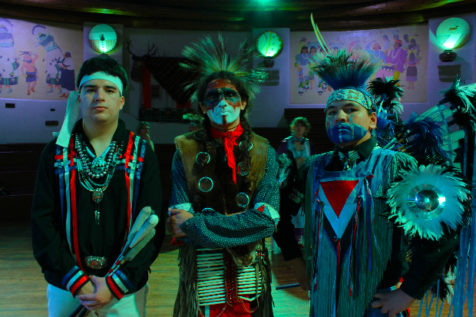 BACK IN THE KOSHARE KIVA, another audience packs the house. Blue-lit smoke flows across the dance floor, and three young men burst onto the floor for the Eagle dance. They pause, abruptly, on the same beat. They spread their feather-draped arms on a diagonal angle and slowly rotate clockwise. At the center, Head Chief Thomas Martinez is poised, confident, a leader. A younger dancer peers sideways at Martinez to make sure he is on beat. The Koshares, past and present, are knit together in a support system that stays with them all their lives. Visible in each performer is the determination to realize their ambitions, despite all circumstances, and that is at the very heart of the Koshare way. 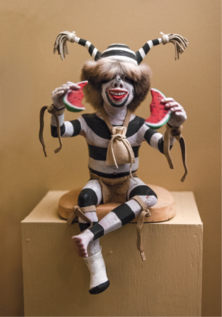 THE KOSHARE DANCERS have always been a tight-knit bunch, but the bond shared by the group’s founding members was especially strong. Dean Strain, one of the inaugural Koshares, came of age at the outbreak of World War II and joined the Air Force. He returned to dance with his old companions in late 1944; three months later he was killed when his plane was shot down on a bombing mission over Germany. To honor their fallen comrade, the Koshares purchased an American Indian painting, “Eagle Dancer” by Potawatomi artist Woody Crumbo, and dedicated it to his memory. That was the first of many paintings the Koshares purchased, and over the decades the collection has grown large enough to fill the Koshare Indian Museum. The exhibits feature works by the renowned Taos Society of Artists; the museum houses the world’s second-largest collection of artwork by Taos founding artist James Imhof, trailing only the University of New Mexico. Also on display are historic native art and artifacts, including carved kachina figures, moccasins, baskets, ceramics and drums.