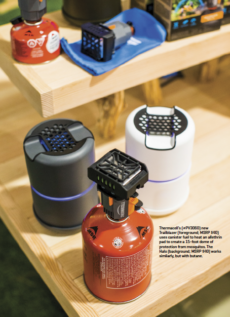 Click here to read the story in the digital issue of Outdoor Retailer Daily, Day 4

As the Zika virus continues its devastating march across the globe—just this week, the first U.S. mosquito-borne cases popped up in Florida, prompting the first-ever CDC travel advisory for a location in the continental U.S.—it’s no surprise that consumers are more anxious than ever to avoid bug bites. Brands and retailers alike are reporting a surge in sales of mosquito-bite prevention products, from insecticide-treated apparel to topical treatments.

White Sierra’s bug-repellent layers sold out online. BUFF saw a significant increase in sales of its Insect Shield repellent apparel and plans to add between 15 and 20 more products by next year. ExOfficio upped orders in January to keep retailers from running out of its bug nets, repellant sprays and permethrin-treated clothing. And while BugBand has been experiencing steady growth for the past five years, the company saw a 20 percent sales hike in January. In general, travelers, backpackers, pregnant women and parents are showing the greatest amount of concern.

“Our sales have paralleled with how big Zika has been in the news,” said BugBand President Dan Ritter. Specifically, the brand’s towelettes and sprays are on the upswing, more so than its bands, which don’t protect against ticks. Post-Summer Market, the company plans to examine its U.S. sales reports to see what role this week’s Zika outbreak has played in retail outlets across the country.

Clearly, 2017’s mosquito-protective products were designed before Zika was even an issue. “The supply chain is 18 to 24 months, at least,” said 37.5 Executive Director Hap Klopp. “The ability to systematically approach [Zika] is a few years down the road—otherwise, it’s marketing bulls**t.”

Companies are working on expanding product offerings for the future, but right now, they’re helping spread awareness about Zika and educating consumers on how to reduce their exposure.

“Customers are best served by knowing all of the preventative options that are available to them, and to know that Zika is a health risk,” said ExOfficio PR Manager Tami Fairweather. “But [the crisis] is not a competitive or business advantage.”

Of course, the Zika virus is just the latest in a long line of insect-borne illnesses affecting travelers and outdoor enthusiasts, from Lyme disease to West Nile virus. Some are on the decline, thanks to improved hygiene and vaccinations. Others are surging, fueled by a warming climate, and some are newly emerging.

And, despite the rapid growth of international travel—the adventure travel market accelerated at a 65 percent yearly rate between 2009 and 2013, according to the Adventure Travel Trade Association—the preventative measures of government agencies and organizations seem to be helping. Ten years ago, three of the most widespread diseases carried by mosquitos—malaria, dengue and yellow fever—were responsible for several million deaths each year, according to the World Health Organization (WHO). Now, vector-borne diseases—which are not solely spread by mosquitos, but also ticks, flies, sandflies, fleas and a variety of freshwater aquatic snails, to name a few—cause closer to 1 million deaths annually.

At the end of the day, a customer’s best defense is head-to-toe protection, said Erika Fiksdal, general manager at Adventure 16. That means brands supplying bug spray, treated clothing and other repellents will likely find a ready market in 2017 and beyond.