Before getting a taste of hiking in the Dolly Sods Wilderness, I discovered how precious it is.

Elated to hear about my upcoming trip, my waitress at Hellbender Burritos was a local and had grown up backpacking all of the area’s loops. The owner of the Purple Fiddle spent his weekend hiking around Bear Rocks. At the trailhead, a woman I met told me she was there to pay homage to her father, who had recently passed. The Dolly Sods had been his favorite place and where he’d always returned. In such few interactions, it became clear to me how special the Dolly Sods is to so many.
A mix of singletrack, old logging roads, and railroad grades: the Dolly Sods’ marked paths meander between yellow birch and hemlock trees, goopy bogs, eye-stretching meadows, and cascading streams. In 1975, the Congress designated the area as protected wilderness, which is now comprised of more than 17,700 acres and 47 miles of trails. From the eyes of a Coloradan, the rippling, lime-hued hillsides are an enviously verdant green.

I chose a 20-plus-mile balloon loop, which I started from Bear Rocks Trailhead, only .2-mile south of Bear Rocks overlook. Altogether, the lollipop gains an accumulative 2,434 feet of elevation and reaches a max height of 4,170 feet above sea level. There are eight other trailheads from which to access the wilderness area: This map shows the trails’ names and exact mileage of each section. As for parking, there was space to pull my car off of the road, across the road from the starting point.

Bear Rocks Trailhead GPS Location: 39.063600, -79.303150
The visual rewards of this itinerary were huge, given the broad environmental diversity that’s experienced on the trip. The course was easy to moderate in difficulty, had very little elevation change, and featured few-to-none steep sections. Also, the loop is attainable in as few as two days. On the other hand, two guys I met from D.C. and their dogs took four leisurely days to explore the same loop. The area also offered a Goldilocks amount of solitude. I met and saw a handful of groups as I hiked, yet the majority of the time, I explored without anyone in ear’s shot or eyesight.
From the Dolly Sods’ high plateau and wind-stunted red spruce, Bear Rocks Trail descends gradually to bogs and a crossing at Red Creek. At mile 2.4, I veered right at Raven Ridge Trail, which rolls over an expansive meadow, into a forested area, and connects with Rocky Ridge Trail at 3.8 miles.

The pass follows a ridge speckled with enormous conglomerate sandstone boulders and incredible views of the countryside to the west. There are a couple of brief sections where the footpath moves across the rocks and is not completely apparent. Hike slowly and scan the shrubs ahead for the re-entry. Hint: If you find yourself bushwhacking, you’ve gone the wrong way. Stroll across the top of Harman Mountain—keep your eyes open for an epic lookout / campsite around mile 6, on the crown—then gradually descend.
Briefly, the program connects with Blackbird Knob Trail, which extends south to reach Big Stonecoal Trail at mile 7. Follow the byway into thick forest and start looking for the Rhododendrons! After .5-mile I was tempted to set up my tent at a nice site next to a musical brook. Ultimately, I craved a window to the stars, so I walked further. I ended up camping on a flat, grassy area between the flowing Stonecoal Run and woodlands at mile 9.4. Note: The next day, I saw a couple of great campsites in well-spaced hardwoods about .5-mile further down the line. 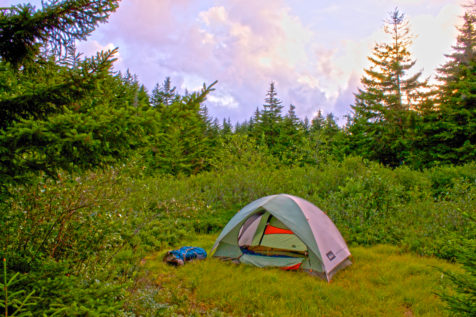 When I turned left on Rocky Point Trail, at mile 10.4, the route entered a thick forest and became (and remained) very rocky as it curved around Breathed Mountain. This section was dense, hydrated, and full of ferns and Rhododendrons—the atmosphere vaguely reminded me of hiking in the Hawaiian rainforest. Eventually, the growth opened up, briefly, for a stunning window of the mountains to the south.

Go left on Red Creek Trail and around mile 14.6 is an area called The Forks—one of my favorite sections of the entire hike. The Left Fork (of Red Creek) and Red Creek converge with small water chutes and pools for cooling off. Nice camp spots are scattered among the woods on both sides of Red Creek—next time, I would prefer to start hiking earlier on day one with the intent of camping here. 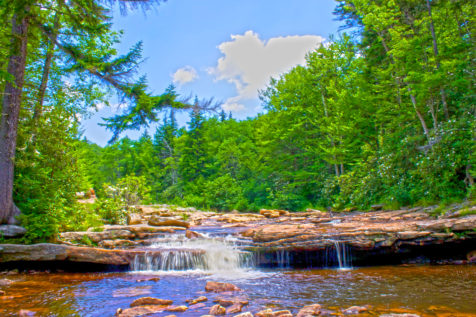 After crossing the flow, bear left, continue north between the trees and up a brief 200-foot ascent to reach Blackbird Knob Trail. Turn right then pass a handful of boggy sections. At the intersection for Upper Red Creek go left. The circuit journeys out of the grove and through meadows, and then reaches Dobbin Grade Trail at mile 17.2. After a short .1-mile segment—and the deepest bog I came across, so watch out!—turn left on Raven Ridge Trail. At mile 18.8, the passage reconnects at an earlier intersection from the day before: Bear Rocks Trail, which is retraceable back to the launch ground.

During World War II, the zone was used for artillery and mortar training. At the trailheads, signs still warn hikers of the possibility of unexploded ordnance. How to stay safe? If you see any devices, don’t touch them! And stay on the central byway.
Speaking of staying on beat: there are plenty of unlabeled, tempting spur tracks. If you do this loop, turn at junctures with distinct signs, which are all clearly labeled with the walkway names. Otherwise, don’t turn off of the road you’re on—unless you want to check out some additional views and terrain.
Also, black bears call the Monongahela National Forest home. Be sure to hang a food cache at night including hygienic products, too.

Check out my backpacking route on Strava.  Read more from my West Virginia adventures.