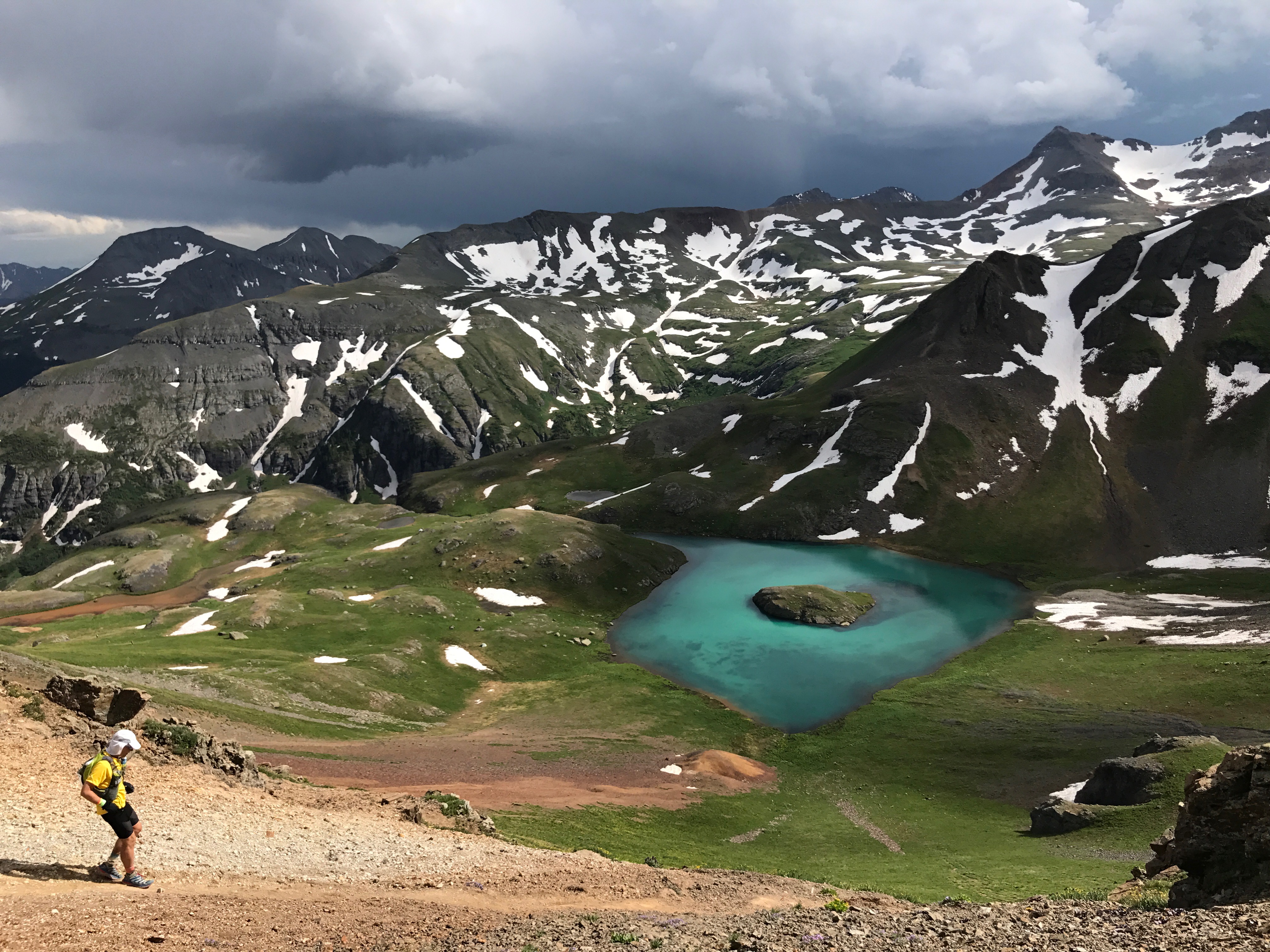 Elite runners from the frontlines of Hardrock 100 share their tips on how to crush a run with insane climbs and mega elevation.

All ultrarunners share a level of grit, determination and joy for adventure. However, the flavors of terrain generally divide the crowd into two broad categories: Those who live to run fast and flat. And others who love to mix runs with “climbs,” a form of speed-hiking dabbled with running on steep ascents. The former would drool over the the Salt Flats 100 course, which features a tad more than 5,000 vertical feet. Whereas the latter would prefer the Ouray 100 Mile Endurance Run, a mountain race that dishes up 42,000 feet of elevation gain.

If you fall into the latter camp, listen up. We interviewed some of this year’s top finishers at the Hardrock 100 Mile Endurance Run—an iconic ultra with 33,050 feet of climbing, extreme exposure and a 48-hour time limit—for their hard-won advice. Here are their best tips on how to crush a race with a heavy load of elevation.

The king of speed ascents

Jornet conquers unimaginable vertical gain. He took first place and won his fourth consecutive Hardrock in July—despite dislocating his shoulder at mile 13 and running with a sling for 58 miles. Several weeks earlier, he won Marathon du Mont Blanc, which boasts 8,957 feet of ascent. But he’s best known for his accomplishment in May: summiting Everest twice in one week, solo, with no supplemental oxygen or fixed ropes. 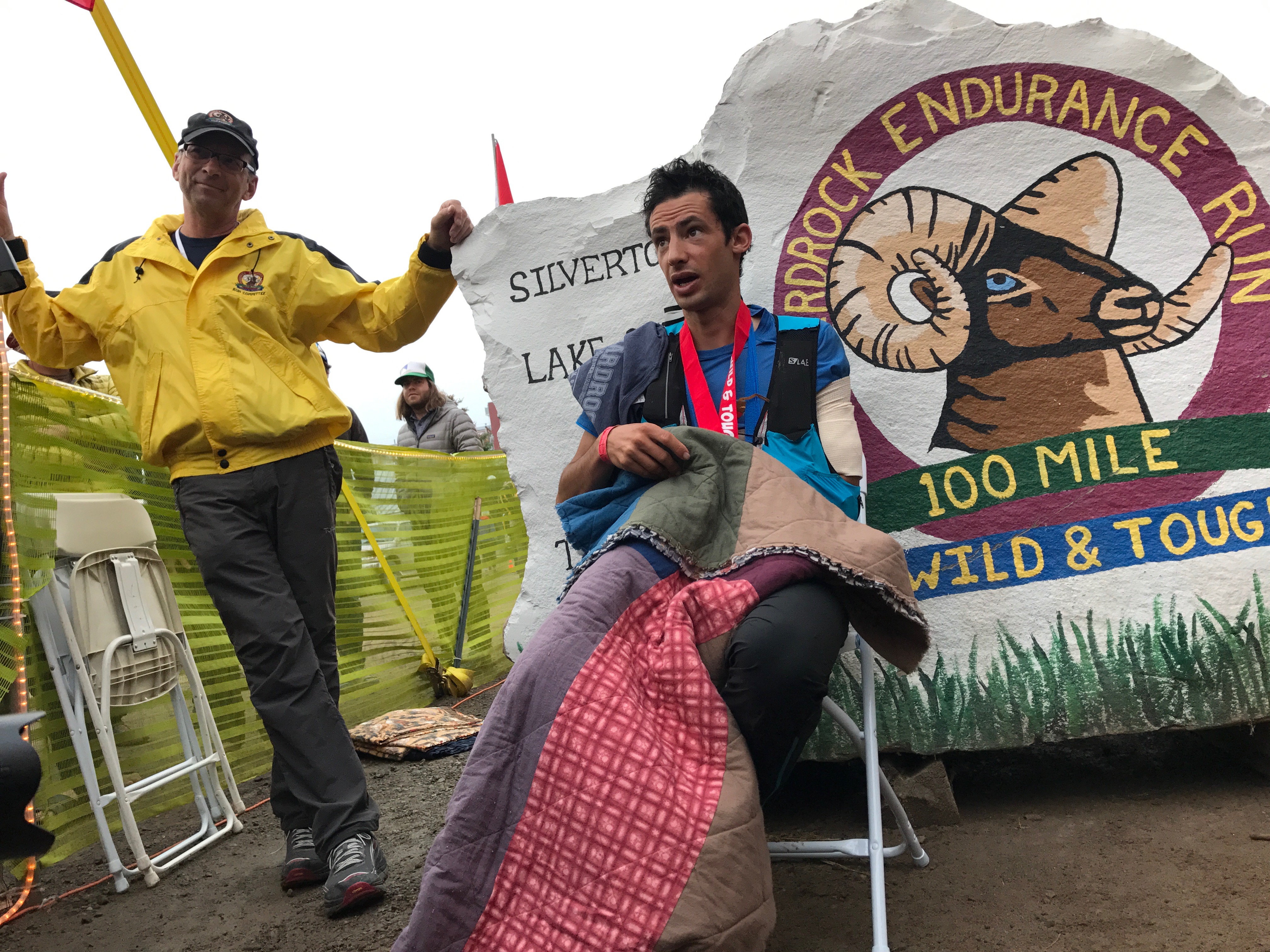 Training: To train for elevation, Jornet says it’s important to run uphill. Lots. Maxing out VO2 (the rate at which your blood carries oxygen to your muscles) is key for improving cardiovascular ability, but it’s also important to develop muscular strength. If you live in a city, you can run stairs or do repeats on steep hills, he suggests.

Here’s one of his go-to workouts: Choose very steep terrain to run up. Alternate five-minute intervals of slow, big lunges with five-minute intervals of fast, super-small steps. You can do the same interval workout cross-training on your bike: Go back-and-forth between pushing large gears—which develops strength—and then sprint with easier gears. A one-hour session, once per week is enough, because completing a quality workout is more important than doing a workout multiple times, he says. During a race, you can mimic that combination (sans the exaggerated steps): “If you alternate between walking steps and running steps, you can rest the muscles and the cardiovascular system, which is also what you’ve done in training,” Jornet says.

Gear: Poles are a good addition because they take work away from the legs. Train with a set if you plan to use them on race day so that you can get used to the movement, Jornet says. When you hold the pole, your arms should make a 90-degree angle. For technique, you can either synchronize a same-side foot-and-pole-placement or plant opposite sides, like in cross-country skiing. When you ascend, push down against the pole straps for leverage.

Jornet’s injury forced him to use one pole in Hardrock this year—which was slightly awkward but still helpful. Typically, he uses two poles throughout the first half of a 100-mile race to alleviate pressure on his legs and then drops the poles at mile 50, so that he can charge ahead at a faster pace.

Piceu has mountain running dialed. She’s a seven-time finisher of Hardrock and has placed first or second female overall each time. Prior to this year’s race, she squeezed the majority of her elevation training in while simultaneously setting a Fastest Known Time (FKT)—among both male and female runners—of 29 hours, 15 minutes on Peru’s Cordillera Huayhuash Circuit. The 85-mile trail holds an average elevation of 14,000 feet and tops out at 16,500. 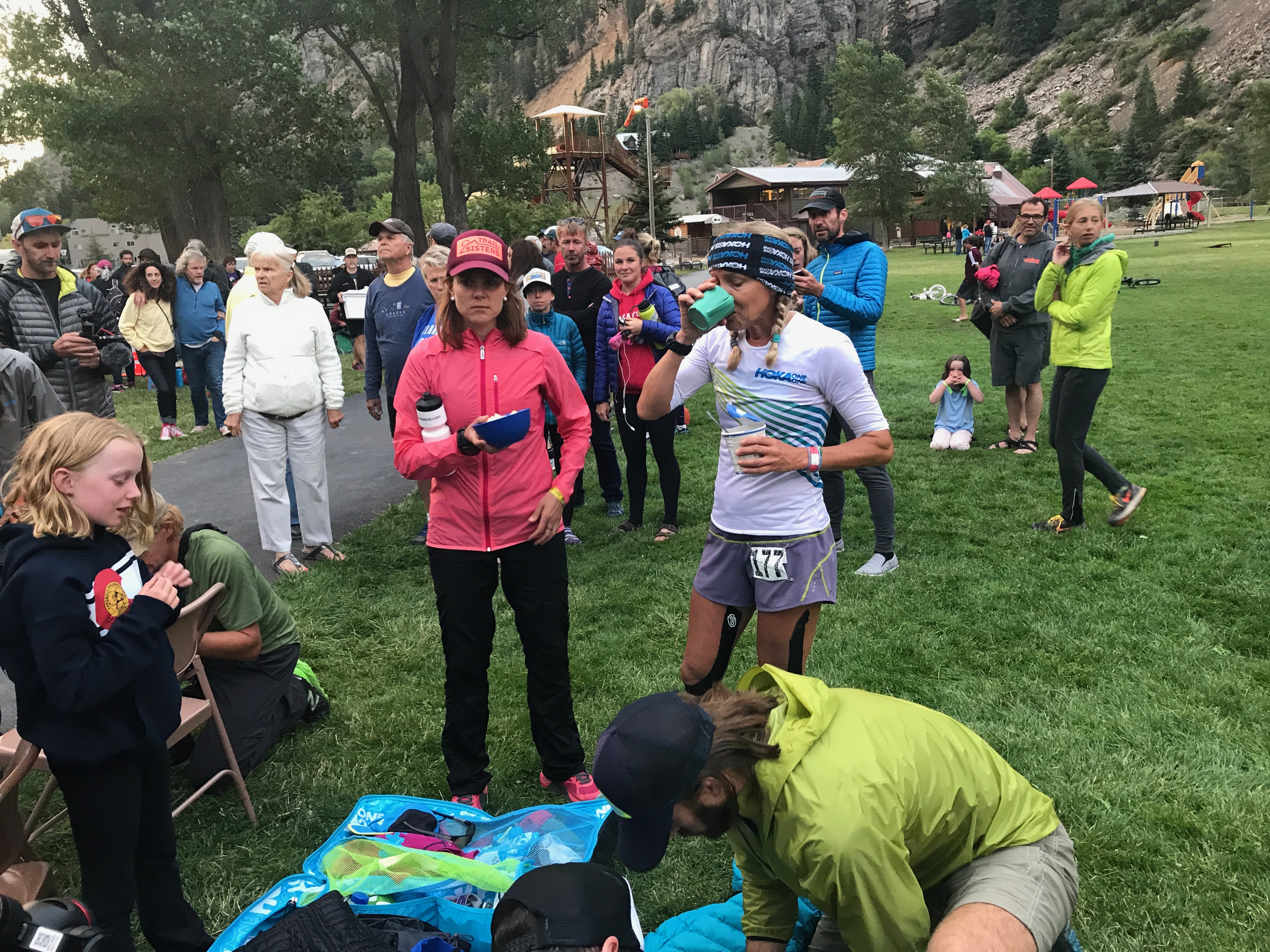 Training: To accomplish tons of elevation, Piceu says that for the long haul, you need to gauge how hard you’re working in the moment: “Have awareness of your breath and if you’re over-exerting yourself. I do personal check-ins and ask, ‘Am I maxing out right now?’ If you are, you can’t maintain that intensity for 100 miles.”

Gear: Piceu uses collapsible poles on ascents and stashes them in her pack for descents—which she’s known to run with reckless abandon: “Focus on being relaxed. Running downhilll is like being on skis. You need to give into the hill a bit as opposed to sitting in the backseat and breaking, which puts pressure on your quads,” she says.

Injury Prevention: More recently, Piceu has faced knee pain, so she used kinesiology tape for the entire Hardrock race (halting mid-race to add tape would be a hassle and clock-drainer) and was blown away by how much it helped to reinforce the muscles. 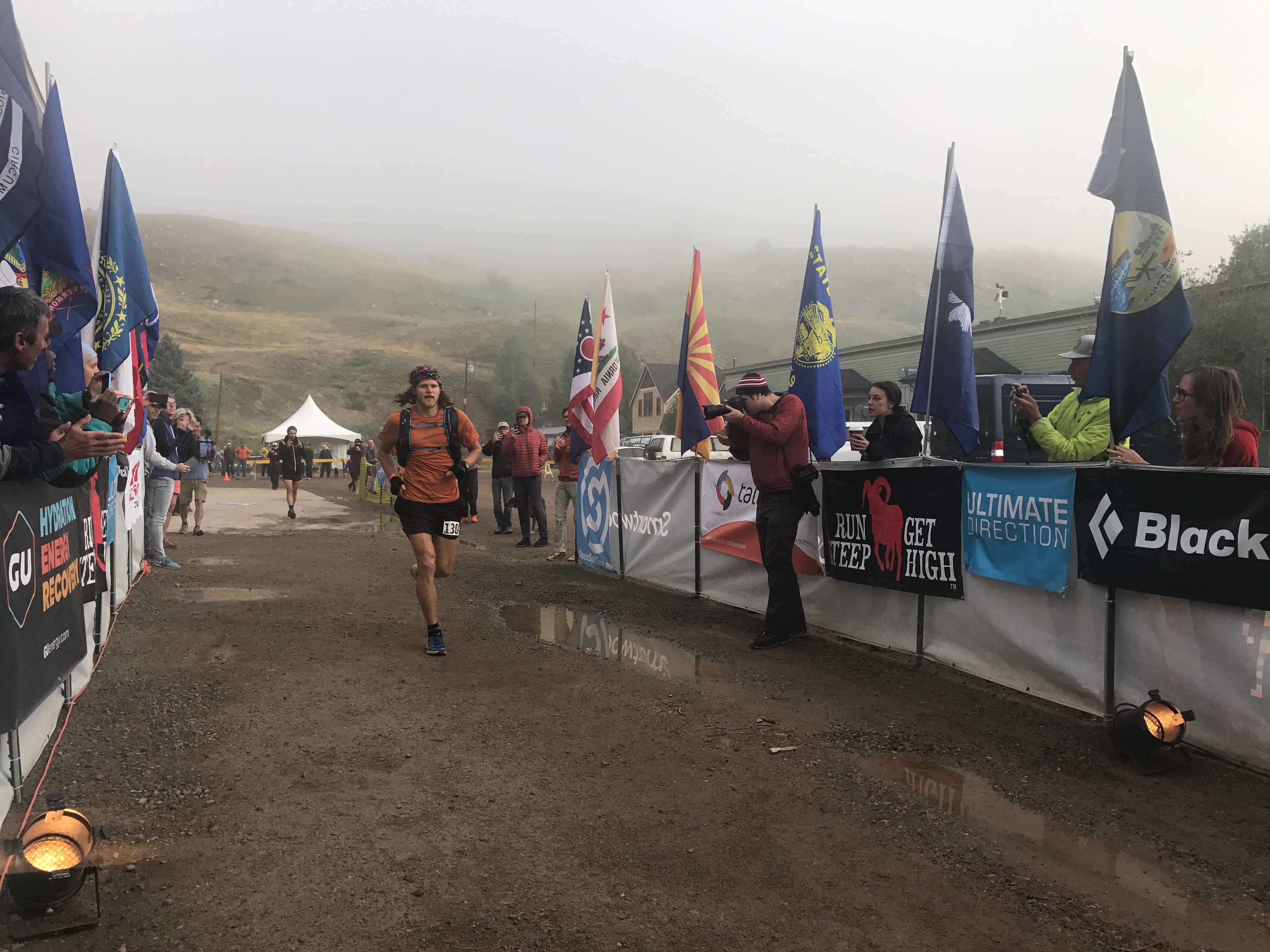 Training: The adventurer says to train with specificity. If your race features big climbs and oscillating terrain, your legs need to be conditioned to take the impact of downhill running, and they need the strength necessary to climb up. “Do a lot of vertical to train. But, the total amount is specific to the individual,” he says. “In general, anyone getting out and doing the activity will create a lot of stimulation. Kilian might do a ‘billion’ feet of vert in a week and other people may do less climbing but include more intensity [in their workouts].”

Perhaps the best way to train for an elevation race is to change your perspective and not view the routine as “training” at all.

“I don’t like to train,” says Grant. “I like to do the sport I’m interested in. I don’t think of running and exploring as training. I think of it as being out in the mountains. I’m inspired by the landscape and cool features.” Grant draws a parallel to climbing: “Hangboarding for climbing is good for precise strength training—which you might incorporate into your training if you’re competing at a very high level in a sport—but if I wanted to be a climber, I would climb all of the time.”

Food: He mostly drinks Tailwind nutrition, a caloric, electrolyte-filled powder mixed with water for the whole race. “For nutrition, everyone is a little bit different. I used Tailwind for the entire Hardrock race and ate Honey Stinger waffles plus bits and pieces of food at the aid stations, but Tailwind works really well for me. It’s easy on my stomach. If your stomach is happy, that’s one part of the puzzle solved.”

Recovery: Off trail, Grant turns to acupuncture for recovery.

Frost is a two-time Hardrock winner. She’s placed first in ultras like the Speedgoat 50K, held in the mountains of the Snowbird ski area, and the Bear 100 Mile Endurance Run, a grueling race across the Wasatch and Bear River Ranges with nearly 22,000 feet of climbing. 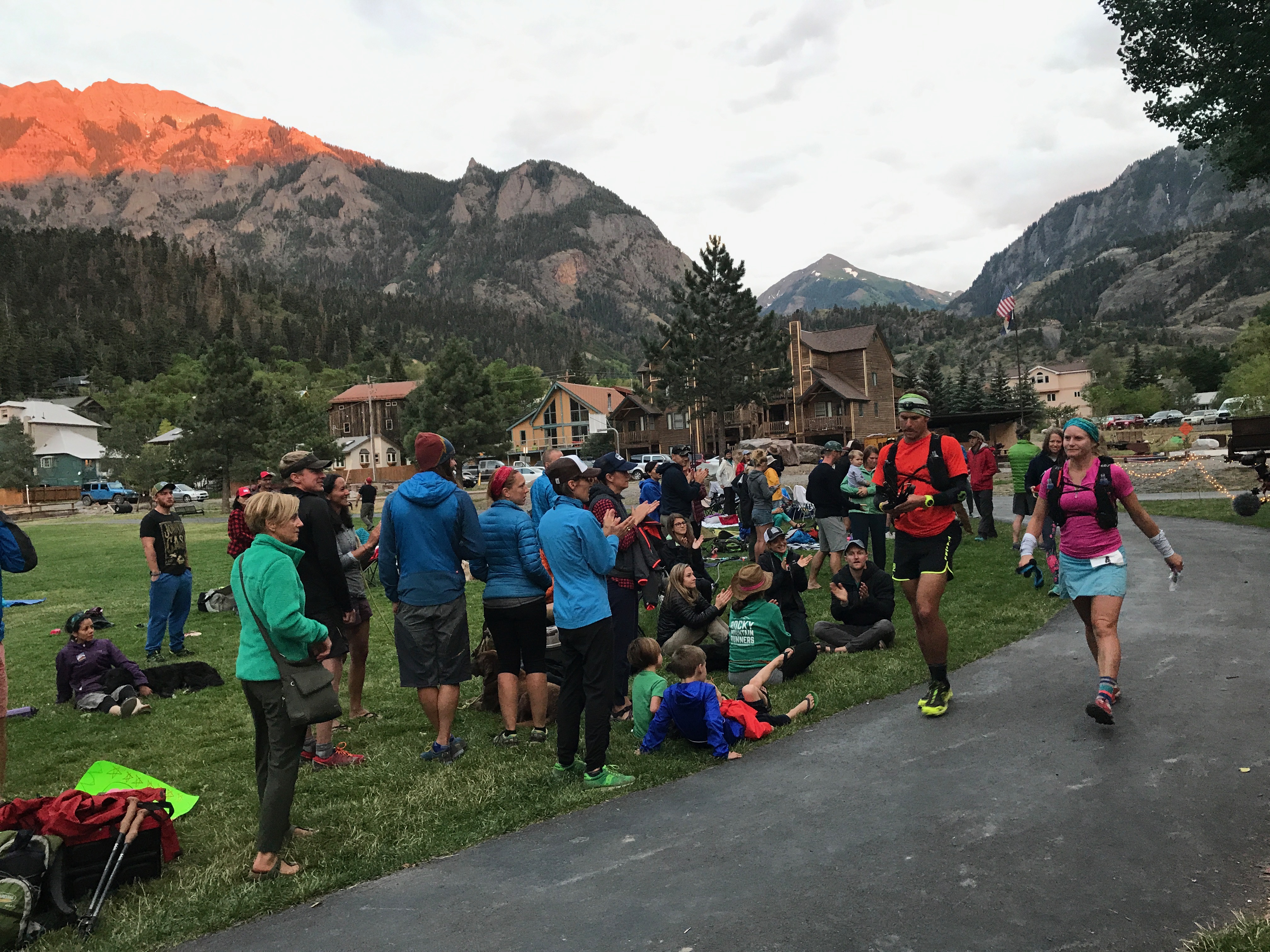 If she’s really tired or lacks motivation for a day she does yoga, swims or goes to the gym: “You can work the same muscle groups—glutes, hamstrings, quads, calves—by doing weight training with exercises such as squats.”

Gear: At the top of her gear list: shoes with excellent outsole grip and reinforced support across the top of the upper (so that the foot doesn’t move around) are essential. She doesn’t use poles in shorter distances—any race that’s 50 miles or less—but uses them in 100-milers.

Mauclair’s home is Paris—a flat city with no mountain access—yet she finished third female overall at Hardrock this year. She took women’s first in the Trail World Championships in 2013 and 2015 and won the Ultra-Trail du Mont-Blanc in 2014 and 2015. 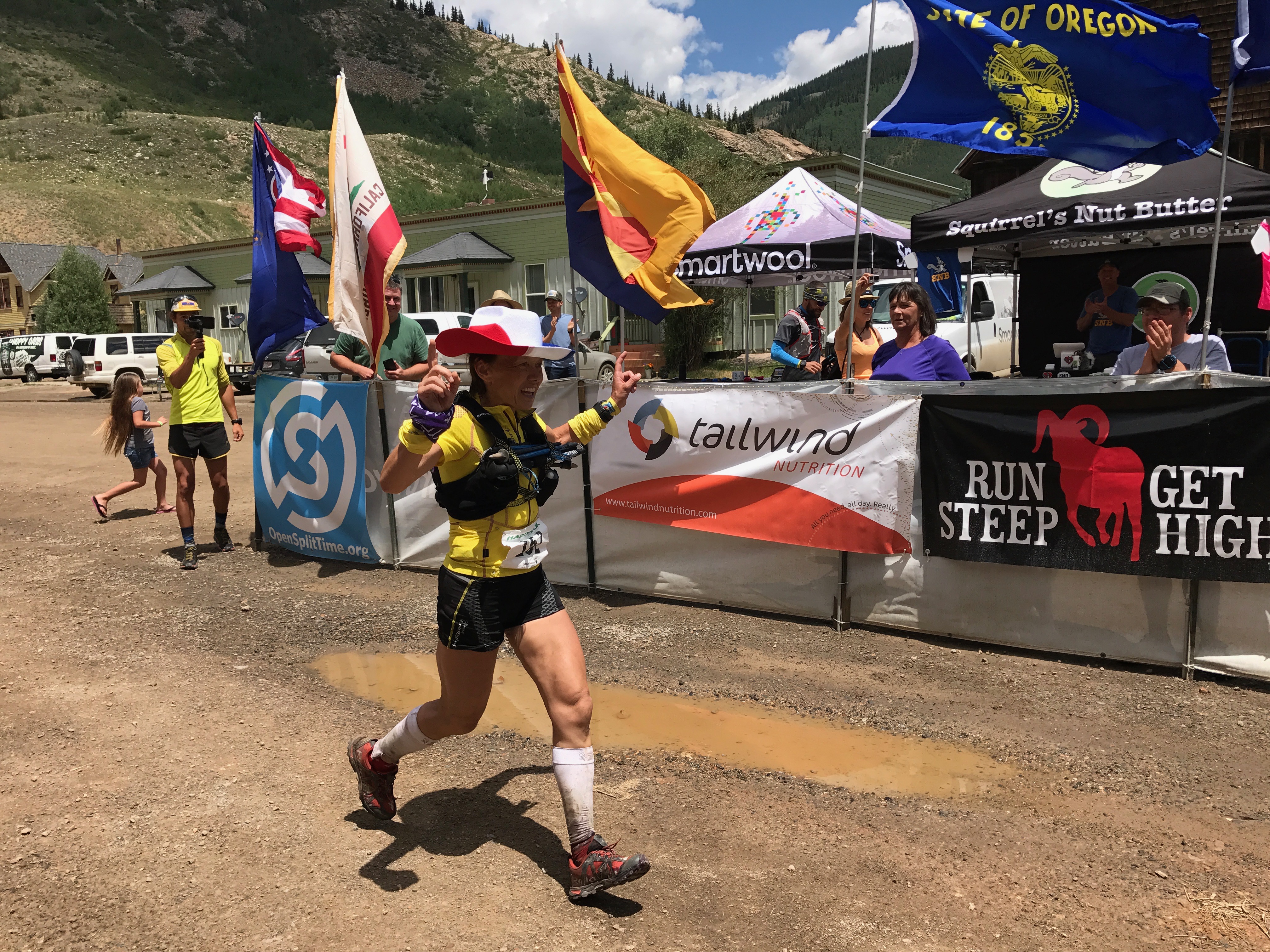 Training: Her secret to destroying mountain courses despite her mountainless home? Tons of cycling. She bikes in the morning, runs in the afternoon and the next day alternates with a run in the morning and a bike ride in the afternoon. Repeat. Biking helps build her quad strength. For running, she also incorporates lots of hill repeats on small hills.

Her run season goes from March to October. In the winter, she maintains strength by swimming and running short distance cross-country races.

Gear: She uses running poles for the climbs and occasionally for descents—but only when the slope is very steep and technical, in order to help brake her speed, rather than exhausting her quads.

Race Day: Her advice for a long race with elevation is: “Don’t start the race too fast. Start at a pace that you are comfortable with so that you are sure you can maintain it.”